A New Beginning for Las Vegas?

Everyone knows your name!

Translated, it means Fun! (Not really.)

But, when some one, anywhere in the world says: "Let's go to Vegas!"
Everyone, no matter where you are in the world, knows what they mean.

So, when the NFL took up the topic of: "Should the Oakland Raiders be allowed to become the Las Vegas Raiders?  For some reason, they voted 31-1: Yes!

And as the insert article from Casino Industry Gaming News states: It was money!

That's because "Money Talks and Bull S@&t Walks!"  Is the old saying, isn't it?

And, they Voted, Yes despite the facts that Las Vegas doesn't rank very high media wise,  But, according to their vote result: Las Vegas still ranks! (No pun intended.)

And, lastly, and this is my personal assessment, as a place to live, work, and raise a family (having lived and worked in other markets) Las Vegas is Number 1!

I think the best thing is: Nevada doesn't have a State Income tax.

Lots and Lots of money pours into Nevada via the Mining Industry, just as well as the tourism industry.

Las Vegas roads are wider than any other city in the world -- even wider than the city (supposedly) built for cars -- Los Angeles.

And on the outside looking in, Clark County and City Planners are more up to speed as to what is necessary to make traffic flow easier around the valley.

When people I'm with complain about the "Orange Traffic Cones" lining the streets, I remind them  that, that signals progress and growth!  We may NOT see the results of that growth immediately, but we will as traffic volume increases, the roads are already wide enough to handle that traffic.

And repairing roads, building much needed On and Off-ramps, wider Freeways and Streets, is all part of a growing economy.  A Valley destine to grow even larger.

Years ago, a developer told me: "If you don't have orange cones in your roads, you have a dwindling economy."

I think Mark Davis knew this and wanted to be apart of it.

How Do You Make Money Living In Las Vegas?

Not too many people ask me this question.

Most family members and friends understand that I am not too tempted by gambling.  Oh, sure, once in a while I will play $21 in Megabucks.  And I have driven a handful of times to Prim or even to Arizona to purchase a Power-ball ticket.

Yes, those, in retrospect have been such a waste of time and money.

But since the most money that I have ever won at gambling is $150 dollars, I quickly cashed out and put that ticket in my pocket. (I guess I'm cheap like that.)

Anyway, since it isn't a well-known fact, that the average Las Vegas resident gambles +/-$2,000 per month while living here, I like being the one that doesn't gamble at all -- or truthfully anywhere near that amount.

When I first moved here and was searching for a Real Estate firm to hang my Nevada Real Estate License, I had one meeting with a broker at the time who knew just what to do when the subject about real estate commissions came up"

He asked me: 'How do you make money in Las Vegas?'

Stumped, I gave the standard response of: work hard, be persistent, etc.

He said, in his experience, he has seen way too many real estate agents take a hard earned commission check down to a local casino, cash it, and by the time they leave (usually several hours later) they have nothing left.

He took a piece of paper (like below) and wrote the word Casino in the middle, he circled the word for emphasis.

Then, looking at me with earnest intent, he said, "Stay out of the casinos!' 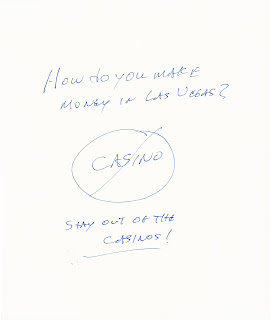 Well, I took that as probably the best advice I had ever heard.  For one thing, I don't like the 'Strip' casinos because they are well, you know, greedy.  And, the noise and crowd isn't something I am attracted to.

Besides, once I moved to Las Vegas I found out for the first time that a casino would be willing to cash a pay check -- without taking the usual 15% that check cashing places take.

I told the broker, that I have a young family and cashing a real estate commission check at a casino wasn't something I was going to do.

I remember him saying something like, 'I hope not.'

It was apparent, that this broker knew too many agents that did that.

Eventually, I hung my license at a firm closer to where I was living at the time, and through the years, I have learned that agents do -- for whatever reason -- gamble away their commission checks.

To me that is probably the dumbest thing you can do.  The reason I know this to be true is: only one person makes money in a casino -- the owner.

Anyone know what you can do with a Shuttered Prison?

When I first read this, I thought:
Why not convert it into an office?
Then, I remembered, offices are losing traction because computers are taking over most office work functions.

Then, I thought:
Why not turn them into schools?
Well, I already proposed that vacant malls be schools because the conversion would cost less in the long run.  Besides, a prison as a school?  Most children already consider schools like they're prisons. 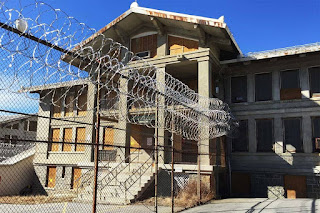 As this news story from the Las Vegas Review Journal indicates, there is not much interest in anyone acquiring a former prison.

So, that leaves me with the only suggestion that I think will work long term.

Tear it down.  And leave the vacant lot as a garden park.

The one potential bidder in the below story thinks turning it into a theme park would work.

What would your thoughts on this be?

Simply for the Benefit of Building a Hotel in Moscow

With the "surprise" results of the 2016 Presidential Election, I don't think - looking back -- anything would have changed,

Trump made promises that, at the time, I knew he wasn't going to keep.

But his promises to the 'non college educated' will ring hollow.  Several news agencies who have had sit down talks with these former factory workers who voted for Trump simply because they felt he was "one of the union guys."  He is going to bring our jobs back, they say.

Trump a union guy?  You have to be kidding me!  Bring jobs back?  My question to these former factory workers is: Are you that uninformed?

+/-60% of all jobs lost since 1979 have been to automation!  Those jobs are NOT returning to human workers!  Never, Ever.

And the guy who you think of as a 'Union Guy,' actually refused to pay the union workers when they did work on his bankrupt casinos!  I don't think of Trump as a union guy.  Never will!

So, don't get me started.

And, with the Trump White House calling the media the "enemy of the state" simply because the news media has dug up information revealing Trump (and/or members of his team) have had constant contact with Russian officials throughout the 2016 campaign, that actually bothers me more than it should.

Apparently, Trump is more than desperate to (allegedly) build a luxury hotel in Moscow.  This is the only thing I can think of that would make him as a patriotic American turn his back on his country, his countries allies, and destroy the America way of life as Trump seems to be (allegedly) doing.

This article is one of the best at explaining the Trump Putin connection situation. 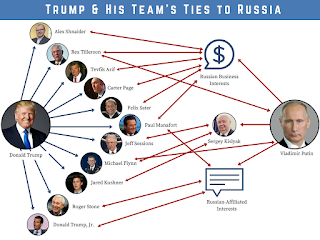 I will let you decide whether or not Trump is 'unpatriotic.'

But, wanting to build a hotel in Moscow must be worth more than we can imagine for Trump to put together such a diverse team who all have such close ties to Russia, Russian officials, and Putin.

For one thing, World War II should have taught us that if Europe is divided into individual Republics, it is easier for a more powerful nation to knock them down, one by one, like dominoes.  This is because the neighboring Republics don't want the more powerful nation attacking them.  But, as history has shown, the powerful nation usually attacks without provocation anyway.  (See Germany circa 1939)

But, as a union of united European nations, if the powerful nation attacks one; then, they have attack them all.

And, Putin understands this.  He is all for European Republics being separate nations.
This makes me think that Putin (allegedly) even wants the United States to be 50 individual nations.  You are capable of doing the math.

Just ask any of the Russian Billionaires who refused Putin.  There are stories of them being thrown in prison until they agreed.  (And sadly, some stories say they have even have been killed.)

I don't know about you, but I find this absolutely annoying.  All it is doing, is helping to divide the United States into the Confederate States once again.

If only the GOP controlled Congress would stand up to the bully at the pulpit.  They could nip this in the butt and right the ship.

So, I ask: Is Donald Trump truly that unpatriotic that he would lead Americans to their demise -- simply for the benefit of building a hotel in Moscow?