Why am I still worried about a Trump Presidency?

A few days ago, MSNBC ran a segment on this year's potential electoral college vote.  As it stands, Clinton already has enough electoral votes if she wins the General Election.

And, MSNBC said, that if Trump wins all the current 'swing states,' he still comes up short to Clinton by 272 to 266 votes.

This means, they said, that Trump has to "flip" (their word) one of the states that is solid in favor of Clinton in order to win the US Presidency.  (MSNBC doesn't think he would be able to do that.)

Well, if this is true, why am I still worried?

So, I did my own research on this topic; and I found that what MSNBC said is true.

So, even after researching this, and seeing that, that possibility isn't going to happen, why are other news organizations still saying that Trump may have an outside chance. Oh, my! 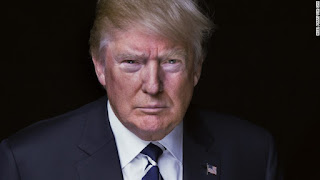 I even saw Karl Rove on FoxNews say that Trump has already lost the election.

Anyway, the reason I am rooting for Trump to lose is that I have a written a Purchase and Sales Agreement for a Las Vegas Resort Property. This 'offer,' currently in the Buyer's hands, is waiting for the US Presidential Election result before his board will allow him to authorize me to submit it to the Seller.

Yes.  The offer is a very large sale. (In the billions.)  Yes. The commission of said sale is very large. (In the millions.)  And, Yes.  That is the reason I am so worried about Trump winning.

(With apologies, I am headed back to needlessly worrying about this.)

Contacting David Howes is easy -- either by: davidATdavidhowesDOTnet OR call him at: 70 25 01 93 88 AND Follow David on Twitter: @DavidAHowes
Posted by DavidHowesCREBroker at 9:05 AM No comments:

Trump is only running for US President to launch his Trump TV Channel!!!!

Ever since April, 2016 -- when my client stated that Trump was just filming a Reality TV show -- I have had this underling gut feeling that Trump hijacked this year's presidential election from the Republican Party, to launch something that was of benefit only to him.

I have been saying all summer, something is NOT right about Trump's run for President.  No one can say such hateful rhetoric and continue on with this fight -- unless he has an underlining motive.

And, now I know what that odd feeling was referring to.

Trump is only running for US President just to launch his own TV Network.

I know, I know. I sound off my rocker.

But, this CNN report actually confirms my suspicion.

If you have knowledge of this, and know that I am correct about this, Please email me

Contacting David Howes is easy -- either by: davidATdavidhowesDOTnet OR call him at: 70 25 01 93 88 AND Follow David on Twitter: @DavidAHowes
Posted by DavidHowesCREBroker at 4:22 PM No comments:

Are you interested in owning a Las Vegas Resort, Hospitality, Gaming or Restaurant Property?

If so, I can help!  Since the economic meltdown, the few that remain means they are pretty good investments.

And, if a 'major' Las Vegas Resort is within your acquisition criteria and financial capability, please click on the Las Vegas Casino Information button in the right hand column. There you will find an Agreement.  Please have your company's CEO or Authorized Signature fill this out completely, sign, scan and email back to me for further details on those properties that are available.

For less expensive Hotel-Motel, Gaming, Restaurants and Bars, please email me your contact information and acquisition criteria.  Once I have received this, I will be able to forward those opportunities as they arise.

I would also appreciate being able to add you -- if you qualify, to my investor client list. That way, when a specific property that I know you are interested in comes available, I would like to be able to send it to you quickly so you can better judge the property information and gauge the extent of your interest in acquiring it.  If not interested, just simply delete and wait for the next property to become available.

Lastly, if truly interested in becoming a gaming proprietor, you will need to apply for and be approved by the State of Nevada Gaming Control Board.  I can refer an attorney to you.

Please understand, that this will be required whether you are trying to acquire a resort casino or a small tavern/supper club property.  Being approved prior to making an offer, will speed up the purchase process since most Sellers will NOT have a close of escrow contingent upon you receiving gaming approval.

I appreciate your patience in this and hope to be able to bring you other Las Vegas Properties to you for your review in the next few months.

Contacting David Howes is easy -- either by: davidATdavidhowesDOTnet OR call him at: 70 25 01 93 88 AND Follow David on Twitter: @DavidAHowes
Posted by DavidHowesCREBroker at 3:15 PM No comments:

With his latest antics and comments during the 2016 presidential election - and the fact that we are within  30 days of voting, I have been re-thinking a comment a client said to me back in May, 2016.

He said: 'Trump is just filming a Reality TV Show!'

Now, I believe the client was Johnny on the spot.  Back in May, I retorted that no way anyone could  hijack a political party; say such god awful hateful things, and expect the American Voter to follow in goose step behind him.

Now, I need to call the client and ask if he had any insider information.

Anyway, while researching for any proof of this, I found this article from a news paper where Trump said he didn't care if he lost the election.

http://www.dailymail.co.uk/news/article-3735157/If-lose-ll-nice-long-vacation-says-Donald-Trump-refuses-change-style-despite-poll-gap-Hillary-Clinton.html
(You may have to copy and paste to see article.)

So, draw your own conclusions.  A very competitive guy is currently resigned to losing; he has said some hateful things about women, Blacks, Hispanics and is within 30 days of the election of the next US President?

Presidential Election history shows, that candidates who were trailing in the polls within 30 days of the election, in the 30 percentile, do loose the election.  Trump is polling in the 30's with less than 30 days to go.

Last May, 2016, I didn't want to buy into the fact that Trump was trying on purpose to lose.  But, now, I am convinced Trump was never, ever a serious candidate about being president.

But, he knows he didn't waste his money.  He invested in a reality TV Show about running for US President.  Should get high, high ratings and Trump will earn his money back.

However, I won't be watching.

Contacting David Howes is easy -- either by: davidATdavidhowesDOTnet OR call him at: 70 25 01 93 88 AND Follow David on Twitter: @DavidAHowes
Posted by DavidHowesCREBroker at 5:58 AM No comments:

There are real estate agents in Las Vegas, NV that I truly don't want to work with. (Sorry about ending a sentence with a preposition.)

The reason is: I don't understand these agents obsession with wanting/having to double end every deal (List and Sell) that they have.  I love double ending deals, too.  But, if another agent has a qualified buyer, there's no skin off my nose to split the commission.

And, their mentality about this element is very, very annoying.

You call them to ask a question about one of their properties; and they never, ever take your call, return your call, nor even reply to an email.

(Now, I want to out these agents! I truly do.  Yet, in the future, I will have to have some form of transaction with them (hopefully, not) but they are here and don't seem to be going away anytime too soon.)

Recently, I was talking to a group of attorneys who own a building where the three are partners in the building where they also have their offices located.  One is moving on -- as in being kicked out of being an attorney (it happens); one is going on a mission (retiring); and the third wants another (better) location.

Anyway, I made a pitch for the listing and told them that I thought their building would sell at around $183 PSF!  Good price given the fact that the last ten years worth of real estate foreclosures really drove prices way down.

Yet, when I was done with my presentation, one of the attorney partners boldly stated that I had used the wrong comparable sales!

He said another broker (actually the other broker is an agent) had told them that he could sell their building at $215 PSF.

I was like, really?  The partner attorney said that the broker (the other agent) had better comps.

I reiterated that I had used the best comparable sales within their zip code and all the zip codes around them.

I asked which comp specially did he use to use as in like to like properties?  The partner attorney said the address.  I was stunned.  Apparently, the other broker (agent), had used an ambulatory building (an urgent care facility) as the best like property to their subject basic office building.

Now, the finishes in the subject property are upgraded; there is marble flooring in the entry -- and along the carpeted halls; there is wood trim everywhere with an upgraded reception desk, too.

But, since the ambulatory building sold six months ago to an investment group buying the property as a NNN investment, sure, the price PSF is going to be higher, but: IT'S NOT A COMP!

It's not a like for like property.  It is a completely different building and use.  And, the zoning is heavy retail.  (They are in a Professional Office Park.)

And, I reiterated all of this to the group in the hopes of dis-swaying them, yet I got the feeling they were NOT impressed.  They had been SOLD by the other agent.

Anyway, long story short -- I didn't get the listing.

After returning to my office, I was re-telling my adventure to one of my two agents.  After, the retelling, she stated: Snake Oil Sales Men!  She knows the agent to whom I am referring to.

I could only agree.  Yet, I told her, there are three attorneys and if something goes wrong during the listing, at least I won't be the one facing 3 angry lawyers with the capability to sue.

God, I want to disclose this company's name.  No, I better not.

Contacting David Howes is easy -- either by: davidATdavidhowesDOTnet OR call him at: 70 25 01 93 88 AND Follow David on Twitter: @DavidAHowes
Posted by DavidHowesCREBroker at 1:43 PM No comments: