Of course, most (maybe all) of you don't know a whole lot about me and my ancestry.

But, it does include great-great-grandfathers who were Sea Captains. (That's correct!)
Especially, Captains of Ships that went Whale Hunting. (I can't turn back time...)

Okay, so they were never a John Paul Jones, or a Captain Ahab or anything like that.

But, since there is a lineage from them to me, I take the title to be given to me honestly.

Since we are in tumultuous times with an arrogant multi-millionaire pretending to be a leader, I think the saying applies.

Do I believe there was a political campaign based on deception? Of Course!
Do I think we'll survive? I hope!

But, when there are red skies at night while at sea, that indicates the next days weather (should be) calm and they will be okay far from shore.

Whereas, if the red sky is in the morning, they know a storm is brewing.  So, the Sailors take heed and prepare for the on coming storm. 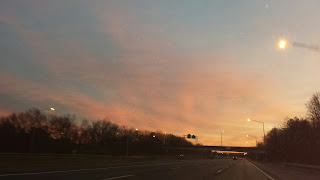 My sister, Dr Janet Howes, took this picture this morning while heading toward Gillette Stadium.

With that said, this past Sunday morning's Red Sky should tell us that the day's weather isn't going to be fair and calm.

If the weather does turn stormy, let's hope we can weather the storm!

In the meantime: Go Pats!

Holiday Cheer to Everyone!

It's my hope that all have a wonderful Holiday Season!

To those who celebrate Christmas: Merry Christmas!

To those who celebrate Hanukkah:  Happy Hanukkah!

To those who don't celebrate anything this time of year: Happy New Year -- regardless of religious affiliation! 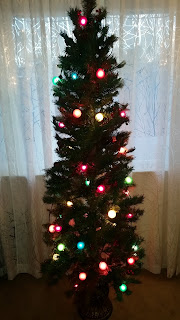 We were going to try to do a gift-less Christmas this year, we'll see how that goes!

Whether you are Young or Old, your Mom is your Mom!

Since this past summer, my 88 year old mom has been asking for me to visit.

So, we (the spouse and I) booked a time between the holidays to go to Boston.

My brother told me that our mom wasn't doing well.  So, off we go!

Anyway, it's going to be a short trip.  With the spouses business doing so well and mine starting to show life again, I have a feeling this might be the last time I get to be with her while she's still alive.

So, off we go. to Boston to visit family I haven't seen in awhile.

See you next week.